I had always heard lots of good things about Duthie Hill, both online and in-person, and I must report, IT WAS AWESOME!  The videos on Youtube had left me a little intimidated, but as long as you only ride on trails that you are ready for, you will have a great time.  It was a beautiful day to go to the park with clear skies and moderate temperatures.  We had the jackets on at first, but once we picked up the pace on the bikes, short sleeves were great. 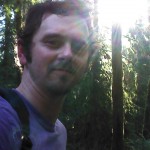 It was a very nice day for a bike ride 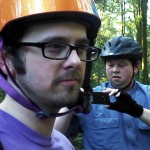 View of BigA and Good-time Slim ready for the trail 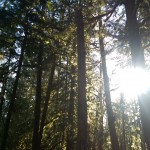 Trying to get a picture of woodpecker through the trees 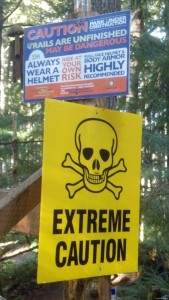 Some of the features are way to advanced for novices 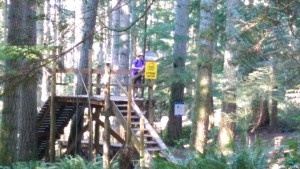 Good-time Slim may have posed for this picture, but notice, no bike

There are definitely trails for all level of rider skill and experience; being a newcomer to mountain biking, this was a good thing indeed.  The King County parks department has done an excellent job at placing signs indicating what level of trail you are going to find yourself on.  Warning signs for extreme features and arrows indicating bypass paths were found everywhere.

We started our adventure at the park by going to the Central Clearing and doing some warm-up runs on the small compact loops and the practice drop-off runs.  Next we hit-up the cross-country trail Bootcamp and got an introduction to what the park had to offer.  We also took a ride on the entirety of the StepItUp cross-country trail and ended up doing a small portion of the Movin’ On trail going from the bottom of the flow-park to the Central Clearing.

The StepItUp trail goes over to the far east side of the park and includes a long path through nicely wooded area.  As we were riding along we could hear multiple woodpeckers banging on the trees around the trail.  At one point, a quite large woodpecker was right next to the trail, so we decided to stop and attempt to get some pictures. 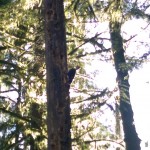 Woodpecker getting ready to peck the hell out of this tree 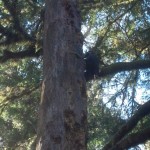 A woodpecker was going to town on this tree 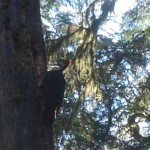 Profile view of the big woodpecker

The most enjoyable trail of the day was the Deuces Wild trail, which is a dual track downhill trail with lots of banked turns and hills to begin practice jumping from.  We rode this trail two times, with Good-time Slim and myself switching between tracks on the two runs.  I ended up finishing first on both runs, likely because of my superior biking skills (put possibly because of a much better bike!)  Good-time Slim reported a wipe out on his second run of Deuces Wild, but I missed the show, as the dual track splits to separate paths for part of the run. 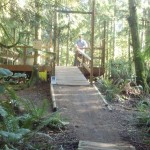 BigA standing at the starting platform for Deuces Wild 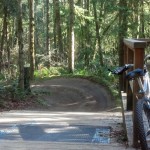 Staring gate at the beginning of Deuces Wild 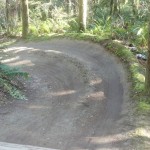 At this point, confidence was running fairly high, so we decided to give the downhill flow park a try.  As the pictures below show, some of the trails at the flow park are quite intense indeed.  Many start off on elevated platforms with big drop-offs or jumps acting as the opening feature for the trail. 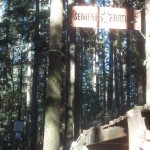 Start of the Semper Dirticus trail. This one is not for lightweights! (like us) 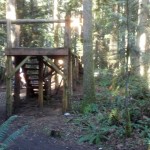 A view of the platform at the start of the Semper Dirticus trail. 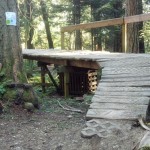 Start of a long section of elevated trail 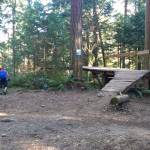 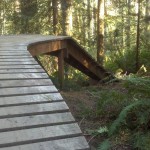 Another section of elevated trail; a bit too steep for me

We had been told that the trail Voodoo Child was a good introduction to the downhill riding, so we decided to give it a ride.  The trail started off with a fairly steep downhill and uphill section, which we rode without problem.  The next part involved some fast banked turns, so I started off with Good-time Slim following behind about 30 seconds. 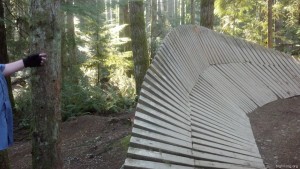 I rode my first decent sized bank wall, which was a blast!  Good-time Slim overcooked the banked wall turn a bit and ended being thrown over the side!  Not quite as enjoyable for him.  A bloody knee, scraped nose and banged up abdomen resulted .  This ended the riding for the day. 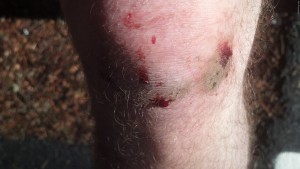 All in all, Duthie Hill was an awesome place to ride the mountain bikes.  It will definitely take many trips to gain enough skill to some of the more advanced features; many of them I don’t think we will ever have the skills to even try.  I definitely look forward to the next trip out to this park!